You don’t have to travel far on the Lakeland fells, you might call them mountains, to become aware of the importance of sheep and the drystone walls designed for both keeping them in some enclosures and keeping them out of other places.

Herdwicks are the famous breed found in the Lake District known for their hardiness and ability to live out on high ground in all weathers. You can think of them as homing sheep because the lambs are “heafed” or “hefted” – old words that explain that the lambs recognize the area where they were born and, once grown, they don’t wander far from that area. After Foot and Mouth, miles of fencing had to be erected to re-establish the heafing for the first new generations.

There are dozens of sheepfolds in the valley. We have pinpointed a total of 45 of them that appear to be more than just for containment. Each is close by a beck, that’s a stream or a burn in other parts of the UK. There had to be a natural pool or dub or a place where  a dam could be made to create a pool. Often the edge of the pool would have stone revetments or earth banks to create a suitable depth where a shepherd would wash his flock in June before shearing.

Cumbria Archives have records going back to the 1650s that refer to sheep salving and washing. The proper name for the place this happened is washfold but they are referred to as wash dubs or simply sheep washes. But why the need to wash the sheep?

In the autumn, the fell sheep were salved. A mix of tar and fat was rubbed into the skin along a strip where the fleece had been parted. Then a strip was parted an inch further along and again and again for perhaps 40 minutes until the animal was completely waterproofed and protected from disease and parasites for the winter.

In June, the farmers had to make a decision before clipping their sheep. A fleece was bought by weight. A greasy fleece got a lower price per pound but weighed more than a clean one. A clean fleece would have weighed less but was worth a higher price per pound. The deciding factor was usually that it was easier to shear a clean sheep.

It seems, from the distribution of washfolds in the valley, that each farm had its own washfold. This is best seen in location of washfolds in each of the closes running up the fell wall above Hall Dunnerdale. This suggest that large gatherings of several farms that show in old photographs of lowland and southern areas were no the pattern in our area.

The washfolds often featured a driving or gathering wall that helped to collect the flock and direct the animals into the chamber. Some of them had shelves built into the wall so the shepherd would have everything needed close to hand.

There may have been just one chamber or even several chambers to allow sorting the flock. The lambs were not washed and strays from neighbouring flocks could be separated. A hog hole in the wall, blanked by a large stone, was a way of releasing the animals that were not going to be washed

In preparation for the washing, the pool would be deepened with a simple dam to raise the water level sufficient for the animals to be fully immersed. This may have been stones and turf or just an old door wedged across a narrowing of the beck.

A narrow opening in the washing chamber allowed the shepherd  to stand on the specially built launching stone  to drop one animal at a time into the water. Other helpers would either have been in the pool or on the bank with long poles to do the washing in the dry. Barrels with stones in the bottom were sometimes used to for the washers to stand in and keep themselves a bit drier.

The old ways became obsolete by the time of the first world war when chemical dips were introduced  to replace the labour intensive salving and washing of earlier years. The first dip was arsenical and from the 1950s it was organophosphates and there is  plenty of literature on their impact on the farmers. The old washdub practice may not have been as effective but it was certainly kinder to the farmer and to the environment. Some of the washfolds have been repurposed as containment folds, some have had chambers blocked which now have full size trees growing inside away from the sheep and some have just fallen into decay.

There is still an annual sheepwash at Ashford on the Water in Derbyshire which draws large crowds. YouTube has several videos showing the event. 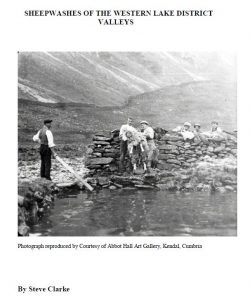 A previous study of washfolds in our area.

In 2009, Steve Clarke of Gosforth completed a survey from Ennerdale to the Duddon Valley.

Download his report by clicking on the cover photo.